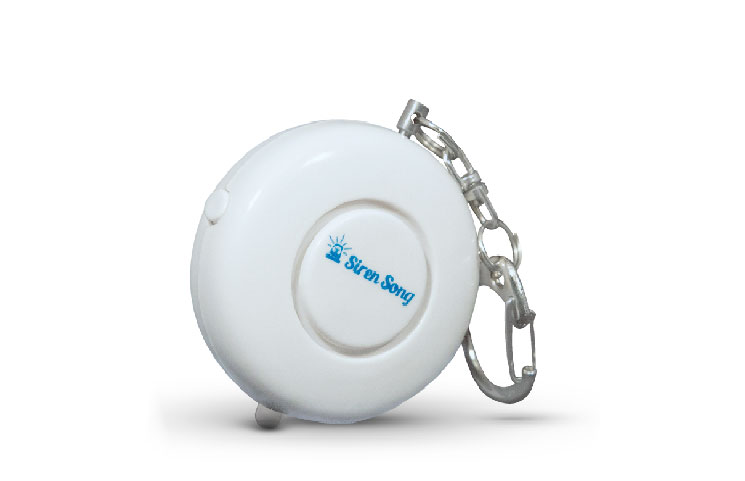 The Siren Song is a personal self-defense siren that can be activated to deter attackers and alert those nearby. Here’s our Siren Song review.

What is the Siren Song?

The Siren Song is a small keychain devices that packs a powerful audible punch. When activated, the Siren Song lets loose a 130 decibel alarm. The device also features an LED light.

The goal of the Siren Song is to deter attackers or to call for nearby help when you’re in trouble. The alarm can be heard from a distance.

As the makers of the Siren Song explain, the device “keeps women, and children safe at all time”. It can be attached to your keychain for convenient access. It also looks a lot like a wireless car key, so attackers may not realize you have a personal self-defense tool.

The Siren Song comes with all of the following features:

-Keychain: Compact keychain makes it easy to hold the Siren Song at all times.

-130 Decibel Alarm: You can hear the Siren Song from a long distance when activated.

-Built-In Flashlight: Powerful LED lets you see in the dark whether it’s late at night or you’re deterring an attacker.

-Unique Design: The Siren Song was designed by a team of engineers. That design purportedly amplifies sound.

The Siren Song is priced at $39.95 USD when purchased through the official website. However, the company recently launched a promotion where you can get a number of the devices at a discounted rate. Here’s how pricing breaks down:

As you can see, the price per device declines sharply the more you buy. The company claims that the device normally sells for $80 at its retail price. However, we couldn’t find any evidence that the device is sold for that price online anywhere.

All purchases come with a 30 day money back guarantee.

Who Makes the Siren Song?

The Siren Song is marketed online by a company that does business under the name Siren Song. That company is located at the following San Diego address:

A quick Google Search shows that the address is associated with a company named Caelum LLC. That company has previously marketed products online like Dermacool Beauty Ice Roller or Magic Lips. It’s unclear if this company makes the Siren Song itself, or if this is just a whitelabel rebrand of a cheaper product (my money is on the latter).

Should You Buy the Siren Song?

The Siren Song is one of many personal alarm devices available today. Unfortunately, it seems significantly higher-priced than most of its competitors.

There’s a GE Personal Security Keychain Alarm sold through Home Depot, for example, for just $6.18 USD. Amazon also sells a 130 decibel keychain alarm called the “Vigilant” at a price of $15.99 USD. That device appears to have virtually identical features to the Siren Song, included the LED light. Similar devices can be found on Amazon for between $8 and $15, including keychain pepper sprays for as little as $6.

Ultimately, the Siren Song is a valuable self-defense tool that can protect anyone from harm. It will deter attackers and alert anyone nearby to your situation. It’s also conveniently shaped like a wireless car key – so it’s discreet on your keychain no matter where you go.

If you pay $40 per Siren Song, you’re paying way too much. Similar devices are available between $7 and $15 online through Amazon and other retailers. However, if you’re buying 8 devices at a time, the $10 per unit deal on the Siren Song looks pretty good (of course, who needs 8 personal safety alarms?).