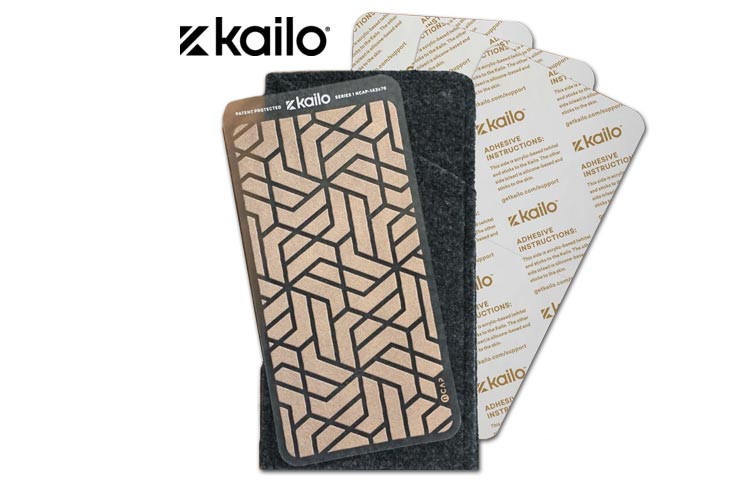 Kailo is a pain relief patch launched in 2019. The patch claims to use biotechnology and electric signals to reduce pain with no side effects.

Kailo Labs LLC launched the patch through a crowdfunding campaign, funding the product in just 143 minutes via Indiegogo. Today, you can buy Kailo online through GoKailo.com, where each patch costs around $120.

Kailo sounds strange – but does it really work as advertised to reduce pain? Does the patch really interact with your body’s electric signals to eliminate pain with no side effects? Find out everything you need to know about Kailo today in our review.

Kailo is a reusable skin patch that interacts with your body’s electrical system to relieve pain.

You place the patch on your body near the source of your pain. You’ll feel the patch tingle and heat up, which means it’s working.

Kailo claims most people will start to feel pain relief nearly instantly. Many people experience pain relief in seconds, although it may take a few minutes.

You can wear Kailo all day, every day. In fact, the company recommends wearing it all the time for maximum pain relief.

Kailo is waterproof, and you can wear it in the shower, while swimming, or during any other activity. Whether you’re exercising, working out, or sleeping, you can use Kailo for pain relief any time.

You place your Kailo patch near (slightly above) your pain, then slowly move your Kailo away from the pain and towards your brain, following the pathway of your nervous system. you place the patch “between your brain and the pain”.

Once you have identified the ideal placement for your Kailo patch, you remove the plastic to expose the adhesive, then place the patch either directly on the skin or over thin clothing.

The Kailo skin patch can be reused an unlimited number of times, although you’ll need to pay new adhesive skin patches from the website periodically.

After application, you should start to feel Kailo warm-up or tingle, which tells you the patch is beginning to work to relieve your pain. Kailo claims many customers will notice pain relief “within seconds”, while other customers might have to wait “a few minutes” to relieve pain.

Shoulder Pain: Place Kailo vertically at the back side of your painful shoulder nearest your arm socket. Move Kailo across your shoulder and up your neck or arm as needed to target the pain.

Elbow Pain: Kailo can relieve elbow pain in seconds. Wrap it over your elbow near the source of pain, and you should start to feel the patch tingle or warm up.

Lower Back Pain: Place Kailo horizontally just above your lower back pain, slowly moving Kailo up your spine to find the place of maximum relief.

Knee Pain: Place Kailo horizontally 2 to 3 inches above the painful knee on the inside portion of your thigh. You can also place Kailo horizontally, directly below the knee, with one edge of Kailo in the center of the shinbone and the other end wrapping around the outside of the lower leg.

Foot & Ankle Pain: Place Kailo across the bridge of your foot or around the backside of your calf just above the ankle. Slowly move Kailo up your leg, pausing along the way until you feel significant relief.

Trunk Pain: Kailo can reduce ‘trunk’ pain in your upper back, middle back, ribs, and midsection. Place the patch over your midsection near the source of pain, then enjoy pain relief.

Hips & Upper Legs Pain: Kailo can reduce pain in your hips and upper legs. Place Kailo anywhere near the source of pain, then wait for the patch to tingle or heat up.

Kailo recommends wearing the skin patch all day, every day for best results.

You can wear Kailo at the gym, while you run, or while sitting at home. Kailo is also waterproof, and you can swim with it or wear it in the shower. The company also recommends wearing Kailo overnight to give you the best sleep ever.

How Does Kailo Relieve Pain?

Kailo claims to reduce pain within seconds or minutes. Just apply the patch to your skin, and it goes to work instantly. The patch tingles and heats up, interacting with your body’s electric signals to relieve pain at the source. You can reduce pain without using chemicals, medicine, or drugs.

That all sounds good – but does Kailo actually work as advertised to relieve pain? How exactly does Kailo reduce pain?

Kailo works because your body has its own electrical field. Your body uses electricity for many crucial body processes. When you experience pain, it’s because electrical signals are being sent from the location of the pain to your brain. The more severe the pain is, the stronger the signal will be.

Kailo’s nano-capacitors interact with the electrical fields of your body’s nervous system, working as an antenna to tell your body to reduce pain in the area. It’s like turning down the volume. Your brain responds by immediately reducing the pain.

Each Kailo patch consists of three layers, including:

Carrier Layer: This non-conductive layer is made from a special kind of synthetic polymer that works as a base for the particle mixture. This layer protects the particles from friction and water damage, which is why Kailo is waterproof and durable.

Nanoparticles: This layer includes the billions of nano-capacitors working as an antenna, reducing pain by interacting with your body’s electrical signals.

Substrate: The third layer of Kailo consists of a patented substrate holding everything in place, creating a dust-proof and waterproof seal.

Overall, Kailo seems to legitimately reduce pain in targeted regions of the body. It will not reduce full-body pain, nor will it eliminate chronic pain. However, if you have specific pain in one region of your body, then Kailo may legitimately reduce that pain during use.

As of June 2020, Kailo’s official website mentions the product is “currently in clinical trial”. It’s unclear when the results of that trial will be released.

The official Kailo website does not mention any other scientific studies, nor does it link to clinical trials that have used the patch.

TENS is a small, battery-operated device that delivers a low-voltage electrical current through the skin via electrodes placed near the source of pain. The electricity from the electrodes stimulates nerves in the affected area, sending signals to the brain that scramble normal pain perception. Kailo seems to be based on a similar premise to TENS.

What Do Customers Have to Say?

Kailo has mixed reviews online. Most reviews are either 5 stars or 1 star: customers either claim it works as advertised to reduce pain, or it doesn’t reduce pain at all.

Overall, some people agree that Kailo works as advertised to reduce pain in targeted parts of the body, although other people claim the patch did not work at all.

Kailo is available online through GoKailo.com. You can also buy it through Amazon and other retailers, although pricing is fairly similar across all online stores:

Each Kailo bundle comes with 1 reusable Kailo patch, one soft carrying case, and three adhesives. You can buy a new 10 pack of adhesives for $17 from the official website.

A: Kailo is a skin patch that stimulates your electrical system to reduce pain in specific parts of the body.

Q: How does Kailo work?

A: Kailo claims to work as a “bio antenna”, using billions of “nano capacitors” to eliminate pain within seconds of applying the patch. The system uses similar technology to TENS: it stimulates your body’s electrical system to mix up pain signals between your body and brain, ultimately reducing pain.

A: Some people claim Kailo effectively eliminated pain in a convenient, painless way. Others claim Kailo did not impact their pain whatsoever.

Q: Is Kailo legit or a scam?

A: Kailo is a legitimate product that claims to reduce pain. It may work on some people – but not others.

Q: What are the benefits of Kailo?

A: Kailo is like having a portable TENS pain management system wherever you go. You wear the patch to stimulate your body’s electrical system. You can wear the patch all day long. It’s waterproof and can be worn while exercising, swimming, or in the shower.

Q: How long should I wear the Kailo patch?

A: The makers of Kailo recommend wearing the patch all day, every day for maximum pain relief.

Q: How do I use the Kailo patch?

Q: What’s inside the Kailo patch? What are the ingredients?

A: Kailo doesn’t infuse ‘ingredients’ into your body. Instead, the patch consists of an array of nanocapacitors that stimulate your body’s electrical system. The other layers of the patch protect the nanocapacitors from dust and water.

Q: Who should use the Kailo patch?

Q: How much does Kailo cost?

Q: Can I wear Kailo to bed?

A: The manufacturer of Kailo recommends wearing the Kailo patch all day, every day – including in bed. You can purportedly enjoy your best sleep ever by wearing Kailo overnight.

Q: Where do I buy Kailo?

A: You can buy Kailo online through GoKailo.com. The patch is also listed on Amazon and other retailers.

Kailo is made by a company named Kailo Labs, LLC. The company has licensed its technology from nCAP Technologies, which has received patents for its antenna system (and is also based in Utah)

Kailo was launched by Stuart Fetzer in February 2018. He’s a material science engineer from the University of Utah, and he’s an active and outspoken member of the Church of Latter Day Saints.

Kailo is a pain management patch that claims to reduce pain in targeted parts of the body. You place the Kailo patch on your body, and the patch uses electricity to stimulate your body’s pain receptors, mixing up signals to your brain and reducing pain in the region. It’s similar to TENS.

Some people find Kailo works as advertised to reduce pain in targeted parts of the body, while others find that Kailo doesn’t work at all. It depends on the type and source of your pain. 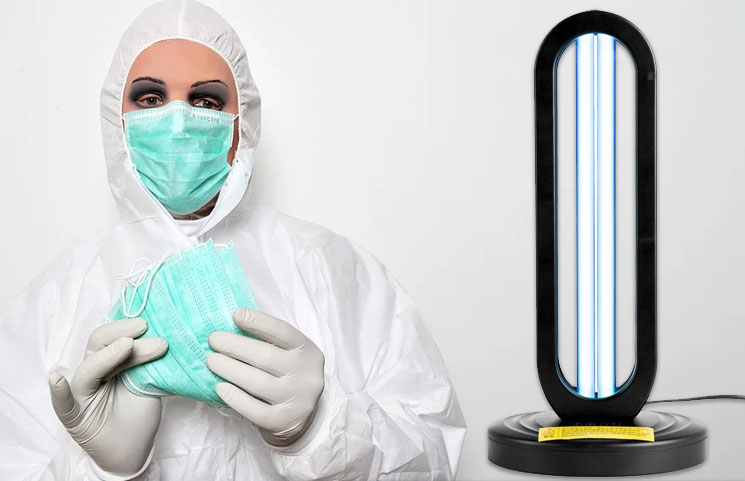 With the COVID-19 pandemic currently plaguing the entire planet, more and more people have started to realize the potential of UV-based sanitization devices. In...